Hello! Welcome to this interview!

I had the great priviledge to talk to James Warnes Wallace via Skype. I developed this not so secret admiration for him because his ministry is basically about helping us as christians to be better case makers for our faith.

He wants to give us the right tools to investigate what we believe so that we can proclaim Jesus with the certainty that evidence is on our side.

1) A christian apologist: which means that he belongs to that smart group of people that presents the reasoned bases of our faith.

2) One of the witnesses we got to see in God’s Not Dead 2, the book AND movie (if you haven’t watched/read it, go redeem yourself after reading this!).

I like him very much because I get what he says! Haha. That’s how I know he really knows his stuff. The only way you can explain something in a way even kids understand is by understanding it very well yourself (or something like that Einstein said).

Anyway, here you find what we talked about. I hope you learn to love him as much as I do because he’s great (his 1st answer will prove it!).

1. Natacha Ramos (NR): First of all, let’s prove everyone you’re a human being. Tell me your favorite artist!

JWW: In other words, I love it when someone is working in an industry where they’re christians, and they are writing music that is accesible to christians, but they don’t write christian music per se.

Let me give you an example. There is a guy named Ben Rector, he’s one of my favorite artists. He’s very much a committed christian but his songs are not always about christianity. Sometimes they’re about other things. I love everything this guy writes.

– I heard first about Ben Rector from Cody Carnes, Kari Jobe’s husband. It looks like this artist is very respected among christians. Great job, Ben!

2. NR: Back to business!
As a christian apologist, you’ve probably heard more than your good share of questions. Have you ever received one that made you doubt?

JWW: I understand people have doubts. One of the things that have been helpful for me is that I’ve worked on a lot of criminal trials.

– I told you he was a detective, remember?

I take a murderer who committed a crime 30 years ago. My job is to put that investigation together for presenting it to a jury. What I’ve learned by doing that over the years is something really important: no matter how well I presented the case, how much evidence I have, there will always be unanswered questions that I cannot answer for the jury.

I’ll have detailed questions about how the crime occured or why it happened to begin with. I can’t always answer those questions, so I learned to be very comfortable with a certain level of certainty in the face of unanwered questions and I think I apply that to everything in life.

I’ve been married to my wife for 36 years. I know she loves me, I still don’t know everything about her and if she’s gone for 4 hours to the market, I guess that’s suspicious and I could wonder if she really went to the market, I don’t know for sure because I don’t have a tracking device on her car. I can’ tell you exactly where she is, but I live everyday with some comfort even when I have unanswered questions.

I don’t think that’s much different for us if we think that related to God.

I’m comfortable with unanswered questions. They don’t cause me to doubt so much anymore. I’ve convicted guys with many unanswered questions and then those same guys later on, after they were convicted, will confess to the crime. So, the criminals were guilty and I arrived to that conclusion even though I didn’t have some important information.

3. NR: Even though I know Scripture and I can explain some of the reasons for our pain, when I’m suffering, it feels like answers are not enough. Have you ever felt that way? How do you handle that?

JMM: You’re right. Whenever we face the problem of evil and pain and suffering, we answer in one of two ways.

If you asked me: “Jim, why does God allow this kind of pain and suffering?”. Well, I can give you a very academic response, right?

I could give you reasons why God allows that, but it won’t be satisfying to you because you’re not just wondering about it intelectually, you’re experiencing the pain emotionally.

There are times when the best thing I could do it’s just to hug the person who is suffering and not to rush to answer the question intelectually.

I think there is a role for the kind of answers I may provide but, in the moment of suffering, you’re right, it hurts and I don’t want anything like that. That doesn’t help me. I’m hurting.

– That’s so goood! Because it’s so trueeee!

It’s a little easier to get through, because you’ve been prepared in advance. Now, if you haven’t prepared in advance intelectually and then this moment of crisis hits you, and anyone comes along and tries to help you, It’s going to feel almost like they’re being mean. But if you crossed that kind of thinking before the pain, I think you’re very equipped to process that experience.

Most of us, when we become christians, we get in by the way of experience, we feel good about it, we have christian friends and everything looks great. We’re embracing a worldview on the basis of how it makes us feel , on the basis of our friends who are involved in it. We didn’t come to this by the way of thinking our way in, we didn’t examine facts.

That’s why when we find ouserlves in moments of suffering, we have no foundation because we didn’t get in that way, we came in a different way.

Therefore, we need to rethink what faith is.

Faith is not displaying the experience you have in spite of evidence, it’s not even the acceptance of some truth cling withouth knowing the evidence. It’s resonable trust we place in something because of the evidence and Jesus knew that. He wanted us to trust in Him and you see He repeatedly said things like: “hey, if you don’t believe what I’m telling you, believe on the basis of the miracles I’ve worked in front of you”. He’s saying: I’m giving you the evidence and if you keep that evidence in mind when you’re in a moment of suffering, you’ll know what’s true even though you don’t feel like it, you’ll still know it’s true in your head if you learn it in advance.

4. NR: Do you think every believer should learn apologetics? Why?

JMM: I think there is no way to be believer and not to be a case maker.

In other words, we’re by definition christian case makers.

But in 1 Peter 3 says that everyone has to be ready to give a reason for the trust they have in Jesus. He doesn’t say “some of us”, he said all of us.

It sounds to me like a demand he’s giving to us. We don’t have a choice. If you’re going to call yourself a christian, you need to be ready to explain why you’re a christian. It means that if you become a christian but you don’t become a christian case maker, you’re not all kind of christian you could be if you did what the apostol Peter said you’re supposed to do. So, I think you have the duty to make a case.

NR: Where should we start?

JMM: I think you should start small.

It seems like an overwhelming challenge. You look all the science that points to God’s existence, the history of Christianity, all the documents, the evidence, and you don’t know where to even begin that process.

Now, this is Internet age, right? There is an amazing amount of information available to us right now for free.

Of course you also find bad information out there for free. You need to figure out who you trust.

That’s why we have a website. I write books and those are available but they are not free. I don’t expect that everyone that is interested in this subject will be able to buy a book, so what I’ve done is that I try to write 3 times a week. I post a video once a week, I post a podcast once a week.

I do that because those things are free and we can provide them to the Church and anyone who is questioning faith. I don’t think there is excuse anymore for people to say “well, I can’t afford to do this”.

I just want to challenge everybody to find resources to start. You can start slow and investigate one point until you master it. Then, when someone asks you “why do you say God exists?”, you might not know all the pieces of evidence, but you’ll know at least one piece of evidence to start making a case. That’s better than not being able to make a case at all.

6. NR: Final words you’d like to say to all of us who were amazed by your testimony in God’s Not Dead 2.

JMM: I hope that everyone could answer the same question in a similar way.

In other words, if somebody asks: “why do you think Christianity is true?”, most of us will answer something like this:

2. “I had an experience that confirmed to me that Christianity was true”

3. “I was transformed by my relationship with Jesus”

Ok, those are good answers but I have 6 six brothers and sisters who were all raised as mormons and if you ask them why they are mormons, they can easily and often do offer the same three answers in the same order. It means our most popular answers are not enough.

The one answer I very seldom ever hear is: “you know, I looked at the evidence for God’s existence, the evidence of Scripture and other resources and I’ve determined that this is true”. I’m a christian because it’s true. Very few people talk like that. That’s why it is so important for us to change. We need to get better answers. If it’s true, it is objectively true, true for all of us, whether we even know about it or not.

The thing is that when you say you’re christian because it’s true, the next thing people will ask is “why do you think it’s true?” and then you need you have an answer. When you give that answer, be prepared to receive very smart questions!

On Writing by Stephen King 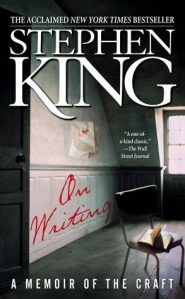 I know, you love him already! :DD

I’m thankful for his time and great answers! I’m honored to call him my brother.

One Reply to “Interview with J. Warner Wallace”